Physical fitness is essential. It helps a person achieve and maintain ideal body weight and it also helps in avoiding dreadful diseases. There are many types of exercise; however, a total body workout is most ideal. It is the most effective method in burning calories and gaining muscle and bone strength because not only a specific body part is made to work, but all.

Using a dumbbell is a workout for the biceps. Using leg press tones the legs. Performing sit-ups gives six-pack abs. Isn’t it hassle and time-consuming to go from one instrument to another; or perform one routine after the other? Rather than performing these and many more exercises one by one, why not opt for a total body workout instead? With a full body routine, you can train the chest, abs, arms, legs, and back all at once. If you want to try this kind of workout to see for yourself how effective it is, you should buy a rowing machine and start getting the fit right at the comforts of your own home.

Using a Rowing Machine: How to Get Started A rowing machine is designed to simulate the process of rowing. This machine features an energy damper attached to a belt or strap and footrests. The first step in using this machine is to position the feet securely into the straps. Next, the body is positioned near the handle by properly bending the knees. Make sure to hold and grab the handle securely while rowing.

Then, start pulling off the footplate using the muscles of the legs. Once you have pulled enough, lean to a 45-degree angle ensuring the spine is aligned. A rowing machine is also called indoor rowing; meaning you can work out at home while watching your favorite movie.

Why Buy a Rowing Machine?
The act of pulling off the footplate works out the leg muscles. The process of pulling the handle back and forth works out the muscles of the arms. Leaning to a 45-degree angle works out the back muscles and while holding that position, you are working out your core muscles. After reading the steps listed above, by now you probably have an idea that a total body workout with just one equipment – rowing machine is possible. If you see a used concept 2 rowing machine for sale, then you should not think twice and buy it right away.

This machine offers many advantages making it a worthy investment. The first advantage, it is potent in toning the core, back and arm muscles. Remember you have to pull the handle by pulling the arms and body back. Your leg muscles will also be at work because you have to create resistance. The second advantage is — because it is a total body workout requiring continuous motion — it makes the heart at work, promoting blood circulation.

The third advantage is it is ideal for both beginners and pros because the rowing machine comes with adjustable resistance. The fourth advantage is it does not harm the joints and bones because they will not come in contact with hard surfaces. Last advantage is the possibility to workout at home – anytime. 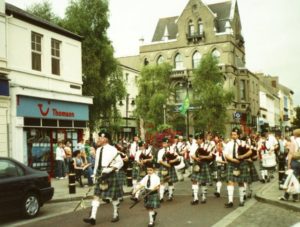 On April 17 and 18, the Missouri LAOH State Convention was held.  Vice President, Mary Kathryn Victor did a marvelous job in organizing it at the Embassy Suites in St. Charles.  On Friday night, there was a Happy Hour, which all the LAOH from St. Louis brought appetizers and snacks.  The LAOH from Kansas City brought all the paper supplies needed.  It was a fun night where all the Missouri Ladies were able to meet and enjoy time with each other.  Then on Saturday morning, there was a meeting where the new LAOH Missouri officers were elected.  The new officers are:  President Mary Kathryn Victor (from St. Louis LAOH John F. Kennedy Division); Vice President Patti Clark (from Kansas City LAOH Padraic Pearse Division); Secretary Sandi Swift (from St. Louis LAOH John F. Kennedy); Treasurer Loretta Sheerin (from St. Louis John F. Kennedy Division); Historian Julie Dunn (from St. Louis John F. Kennedy Division); Missions and Charities Pat Karns (from Kansas City LAOH Padraic Pearse Division), and Catholic Action Julie Hogan (St. Louis LAOH St. Patrick’s Division).  Later in the day, all members could visit the St. Charles area of shops, go to the Casino or just visit.  Then at 5:00 p.m., LAOH Chaplain Lawrence Herzog said the Mass.  Following Mass, all went to a Banquet in the Hotel.  Fr. Lawrence Herzog installed the new officers after the dinner.  Fr. Herzog was presented with a LAOH Chaplain Sash from the Past President, Sharron Olsen.  Great time held by all.

We had a nice sunny day; mid-40’s by parade time (not bad for mid-March) and a wonderful turnout.The festivities started at 9:30 am Holy Mass sponsored by Archbishop John Ireland Division 4, AOH.

Mass was celebrated at the beautiful Cathedral of Saint Paul by Auxiliary Bishop Lee Piche – French, but as he noted in his homily, Irish on Saint Patrick’s Day.  The Mass included an Irish piper leading us in with the great piece “Slane” and ending with “A NationOnce Again”.  At Mass, the AOH Division 4 recognized our annual scholarship students who hail from three Catholic high schools in Ramsey County.

We also presented the Archdiocese of Saint Paul-Minneapolis with a $1000 donation to the Saint Paul Seminary. Our AOH members teamed up with the local chapter of the Knights of Columbus (whom we share members) preparing a terrific brunch in Hayden Hall (parish hall located in the basement of the Cathedral).After Mass, we were off to the 49th Annual St. Patrick’s Day Parade in downtown Saint Paul which started at noon.

The Archbishop John Ireland Division 4 marched with our fellow Hibernians from Minnesota’s Shamrock Division 1 along FifthStreet while the Brian Boru Bag Pipers (marching in front of us) provided arresting Irish “trad” tunes all the up the paraderoute for the thousands of onlookers. The parade ended at historic Rice Park where parade marchers and onlookers intermingled for a good old-fashioned Irish hooley

The Irish Echo newspaper recently held a St Patrick’s Day reception on Capitol Hill to unveil a portrait of the late Pat Finucane (1949-1989) – the slain civil rights attorney from Belfast.  The Echo commissioned artist Robert Ballagh to produce the painting.  Congressman Richard E. Neal Chairman of the Friends of Ireland and Congressman Chris Smith unveiled the portrait inside a well appointed meeting room in the Capitol Building just down the hall from the House Floor.

The portrait was unveiled to an audience of more than one hundred members of Congress and Irish American leaders. The AOH was well represented at the event that including Freedom for All Ireland Chairman Sean Pender, National Editor and Director Keith Carney and Washington brothers Jack O’Brien, John McInerney, Roury McDonald (whose father worked with Pat Finucane).  Baltimore brothers Daniel Layden, Mike Breen, Bill Pribyl and Malachy McAlister also attended.

The reception included a special guest, Pat Finucane’s wife Geraldine.  A truly moved Mrs. Finucane had trouble overcoming her bittersweet emotions at the event.  She thanked all for the special portrait and described all of the attendees in the rooms as “friends,” which was appropriate.